This post is re-blogged from New Security Beat, the blog of the Environmental Change and Security Program at the Wilson Center. You may find the original piece here, posted on April 21, 2016.

The author of the article, Louise Lief, is a former Wilson Center fellow and current scholar-in-residence at the American University School of Communication’s Investigative Reporting Workshop.

The findings detailed failures in multiple government agencies to address high levels of lead, a neurotoxin, in the city’s water. To cut costs, in the spring of 2014 Flint’s state-appointed emergency manager had switched the city’s water supply from Detroit’s system to the more polluted Flint River and kept it there, despite community protests, for 18 months.

Calling the crisis “a clear case of environmental injustice,” the task force issued 44 recommendations that will cost millions to implement. The long-term damage to many Flint children is irreversible.

The hidden success story in this disheartening tale of denial and indifference was the collaboration of an ad hoc coalition of journalists, citizens, and academics whose combined efforts finally compelled the state of Michigan to act. “Without their courage and persistence,” the report noted, “this crisis likely never would have been brought to light and mitigation efforts never begun.”

As New Jersey and Ohio have discovered, lead’s story doesn’t end in Flint. There are an estimated 10 million lead service lines in the U.S., part of the nation’s deteriorating water infrastructure that will require an estimated $1 trillion to rehabilitate.

As other communities wonder what perils they face, the Flint collaboration offers a road map on how to tackle environmental and other problems when government fails to act, especially for the most vulnerable communities.

END_OF_DOCUMENT_TOKEN_TO_BE_REPLACED

In April 2014, the city of Flint, Michigan decided to switch its water supply source from the Detroit water system to a cheaper alternative, the Flint River. But in exchange for the cheaper price tag, the Flint residents paid a greater price with one of the worst public health crises of the past decade.

Despite concerns from Flint citizens about the quality of the water, the Michigan Department of Environmental Quality repeatedly attributed the problem to the plumbing system. It was 37-year-old mother of four, LeeAnne Walters who, after noticing physical and behavioral changes in her children and herself, set off a chain of events that exposed the national scandal. Eventually, with the support of Dr. Marc Edwards, an environmental engineering professor at Virginia Tech (VT), Walters discovered lead concentration levels of 13,200 parts per billion in her water, 880 times the maximum concentration allowed by law and more than twice the level the Environmental Protection Agency considers to be hazardous waste. END_OF_DOCUMENT_TOKEN_TO_BE_REPLACED

The Wilson Center’s Commons Lab just published an interactive timeline, using TimelineJS by the Knight Lab, on social media and terrorism with the assistance of scholar Gabriel Weimann and other collaborators.

For further reading on this subject please see the following papers and infographic published by the Commons Lab:

Towards Trustworthy Social Media and Crowdsourcing by George Chamales

On Cybersecurity, Crowdsourcing and Social Cyber-Attack by Rebecca Goolsby

Editor’s note: In September 2012, the Commons Lab hosted the Connecting Grassroots to Government for Disaster Management workshop. Over two days, we spoke with a number of event participants for a series of video podcasts covering various aspect of the proceedings. Additional installments will be posted in the coming weeks. The workshop summary report is available here.

In this podcast, Michael Frank Goodchild talks about major improvements he sees taking place over the next decade in relation to social media and disaster response, particularly how diverse, web-based data streams could be cleaned up and synthesized. With new technologies, Goodchild hopes for “a means to turn a whole lot of stuff into a complete picture.” Goodchild further talks about data quality issues surrounding this information.

We spoke with Goodchild at the Connecting Grassroots to Government workshop in September 2012. 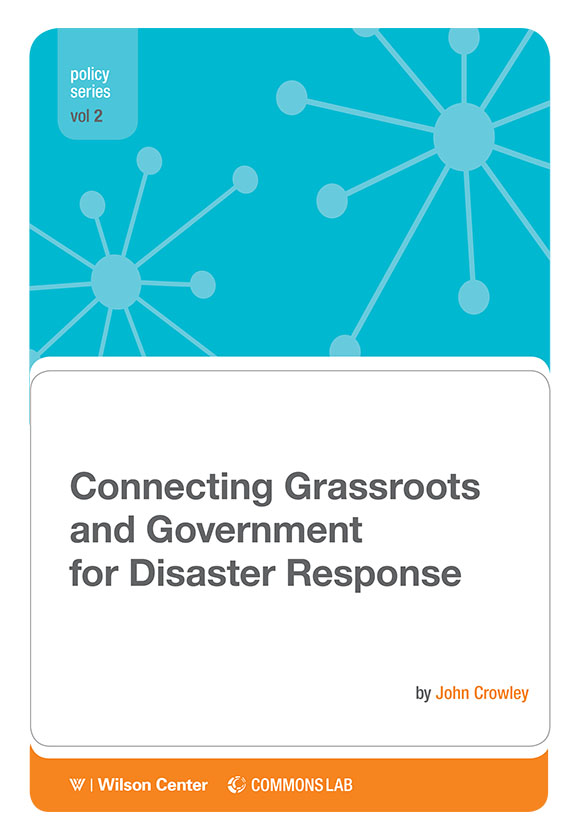 Leaders in disaster response are finding it necessary to adapt to a new reality. Although community actions have always been the core of the recovery process, collective action from the grassroots has changed response operations in ways that few would have predicted. Using new tools that interconnect over expanding mobile networks, citizens can exchange information via maps and social media, then mobilize thousands of people to collect, analyze, and act on that information. Sometimes, community-sourced intelligence may be fresher and more accurate than the information given to the responders who provide aid.

The Commons Lab has released Connecting Grassroots and Government for Disaster Response, a new report by Public Policy Scholar John Crowley that explores approaches to the questions that commonly emerge when building an interface between the grassroots and government agencies, with a particular focus on the accompanying legal, policy, and technology challenges.

Also see the companion report from our September 2012 workshop, written by Ryan Burns and Lea Shanley, as well as a series of videos from the workshop and podcasts with workshop participants.

The growing use of social media and other mass collaboration technologies is opening up new opportunities in disaster management efforts, but is also creating new challenges for policymakers looking to incorporate these tools into existing frameworks, according to our latest report.

We are now proud to unveil “Connecting Grassroots to Government for Disaster Management: Workshop Summary,” a report discussing the key findings, policy suggestions, and success stories that emerged during the workshop. The report’s release coincides with the tenth annual Disaster Preparedness Month, sponsored by the Federal Emergency Management Agency in the Department of Homeland Security to help educate the public about preparing for emergencies.
END_OF_DOCUMENT_TOKEN_TO_BE_REPLACED

During last week’s frenzied pursuit of suspects after the Boston Marathon bombings, we commented on the danger of attempting to crowdsource a criminal investigation. After Friday’s arrest of Dzhokhar Tsarnaev, new information on how law enforcement located the suspect has shed light on the process. Despite good intentions, intelligence analysis of this type is a poor fit for untrained amateurs. From the Washington Post:

[T]he social media revolution meant that the FBI and Boston authorities were under intense pressure to move even faster, because thousands of amateur sleuths were mimicking the official investigation, inspecting digital images of the crowd on Boylston Street and making their own often wildly irresponsible conclusions about who might be the bombers.

On an investigative forum of Reddit.com, since removed from the site, users compiled thousands of photos, studied them for suspicious backpacks and sent their favorite theories spinning out into the wider Internet.

“Find people carrying black bags,” wrote the Reddit forum’s unnamed moderator. “If they look suspicious, then post them. Then people will try and follow their movements using all the images.”

The moderator defended this strategy by arguing that “it’s been proven that a crowd of thousands can do things like this much quicker and better. . . . I’d take thousands of people over a select few very smart investigators any day.”

In addition to being almost universally wrong, the theories developed via social mediacomplicated the official investigation, according to law enforcement officials. Those officials said Saturday that the decision on Thursday to release photos of the two men in baseball caps was meant in part to limit the damage being done to people who were wrongly being targeted as suspects in the news media and on the Internet.

Fortunately, the suspect was apprehended and critiques of Reddit’s investigative techniques were swift and emphatic. But this could have easily gone much worse. This experience provides an example of where the wisdom of the crowd can be anything but wise.

In the wake of the horrific bombings at this week’s Boston Marathon, a complex web of agencies has been furiously searching for suspects. Intelligence analysis is already a challenge, and attempting to identify suspects at a massively popular public event is even more difficult. Eager to scoop this major story, news outlets have repeatedly “broke” pieces on suspects only to retract them quickly. The paucity of information has been exacerbated by dubious crowd-based efforts to aid the search.

Popular news aggregator Reddit quickly created a subReddit entitled “FindBostonBombers,” inviting community members to share information and photos of the scene before, during and after the explosions. While the forum contains multiple disclaimers discouraging racism and posting of personal information, the limitations of this type of analysis quickly became apparent. These well-intentioned efforts have led to multiple false positives, and major outlets who eagerly seized the opportunity to beat the rush have been forced to back off: the “person of interest” was in fact a local high school student. END_OF_DOCUMENT_TOKEN_TO_BE_REPLACED

We are inundated daily with stories from the news media about the possible impact social media like Facebook and Twitter will have on our lives. When a storm like Hurricane Sandy hits the East Coast, can this technology actually help to save lives and reduce catastrophic damages? It’s possible.

For instance, mobile devices could allow emergency responders, affected communities, and volunteers to rapidly collect and share information as a disaster unfolds. Photos and videos provided through social media could help officials determine where people are located, assess the responses and needs of affected communities—such as water, food, shelter, power and medical care—and alert responders and citizens to changing conditions.

At least that is the promise. When Hurricane Irene barreled across the Eastern seaboard in August 2011, many in the news media cited it as a pivotal moment for social media for disasters. But research we conducted on the use of social media during Irene suggests otherwise. While some emergency management departments launched new social media outreach strategies during the storm, particularly to push information out to the public, many did not change their practices radically and overall use of the technology varied. END_OF_DOCUMENT_TOKEN_TO_BE_REPLACED

The Commons Lab has made available our library of documents and citations on the popular open-source citation management system Zotero. This library is a tagged, searchable list that makes available full bibliographical information, and downloadable full text editions of publicly available documents.

The library can be accessed here: https://www.zotero.org/groups/82887/items

We hope this is a useful resource. The Commons Lab is on the lookout for more resources concerning the crowdsourcing technology and policy, and is accepting submissions for entry into the library. Please get in touch at commonslab@wilsoncenter.org with any suggestions.